Superbikes from all eras, including a clutch of desirable Brough Superiors, will line up with a more sedate collection of vintage sidecars in next month's three-day Bonhams Summer Stafford Sale which will present more than 330 machines from 2 to 4 July.

The Brough devotee and specialist's objective was to recreate Noel Pope's Brough Superior that set the outright motorcycle lap record of 124.51mph at Brooklands 80 years ago, which still stands. Incorporating many original Brough parts, this stunning machine is a formidable re-creation delivering the same power, speed and smell as the original.


Click this link to go to the official auction website.   https://www.bonhams.com/press_release/32404/     be careful while looking at the photos as you may drool on your keyboard.

In its slipstream is another desirable example of the early superbikes a 1931 OHV 680 'Black Alpine', estimate £120,000 – 160,000, offered from the National Motorcycle Museum. Dubbed the 'Miniature SS100', this ultimate middleweight Brough was restored in the late 1970s/early 1980s and has been owned and displayed by the museum since.


However, not all Broughs were destined for Brooklands or other racetracks. Fitted with a Petrol-Tube Sidecar, the third highlight from the British maker, a 1937 1,096cc 11-50, estimate £55,000 – 75,000, was delivered new to the Sheffield Police force. The largest model of the marque was still capable of a top speed of 90mph solo and an impressive 75mph with its sidecar. Living up to its 'Superior' name, this combination was the finest of its time, with the sidecar offering comfort with its red leather interior, exterior luggage rack and even mascot.

Along with the Brough, the Stafford Sale will be offering a collection of ten sidecars, tri cars and hybrids from the National Motorcycle Museum. Representing the golden age of vintage motorcycling, highlights include an extremely rare 1923 Martinsyde Motorcycle Combination, estimate £22,000 – 28,000, produced by the former aircraft manufacturer, and a 1925 Seal 980cc Family Motorcycle Combination, estimate £16,000 – 20,000. This unusual motorcycle/car hybrid is one of only two known survivors and has its controls, with a car-type steering-wheel, inside the sidecar, which can carry two adults and two small children.


Bonhams Motorcycle Sales are always fertile ground for presenting long-hidden 'barn finds' and never-completed projects. The Summer Stafford Sale continues this tradition, being peppered with fresh to market machines that have not seen the light of day in years or even decades.

A rather shinier motorcycle, with a touch of stardust, is the 1973 Norton Commando 850 Roadster offered by the family of the late Keith Emerson, estimate £5,500 – 7,500. This was the second Commando for keyboard maestro and founder member of the 1970s 'prog rock' group Emerson, Lake and Palmer, who bought after his first, which he used to commute from his Sussex home to a London recording studio, had been stolen.

The sale will be a traditional live auction, welcoming bidders back into the saleroom, in addition to being streamed and available on the Bonhams App, providing registered bidders the opportunity to bid in real time online via Bonhams.com. Absentee and telephone bids are also encouraged.

Friday
In accordance with the latest Covid-19 related guidelines, numbers will be limited in the saleroom, so viewers should register in advance with the Bonhams team: ukmotorcycles@bonhams.com.

Saturday/Sunday
Entry to the International Classic MotorCycle Show and Bonhams Summer Sale Auction is by ticket only, which must be purchased in advance at www.classicbikeshows.co m or by calling 01507 529529.

Ticket numbers are limited for both Saturday and Sunday and will no longer be available when the maximum capacity is reached for attendance. There will be no tickets sold on the day.

Last post by Biketographer - June 23, 2021, 06:52:07 AM
SUNNYVALE, Calif., June 22, 2021 /PRNewswire/ -- The Ducati Multistrada V4 S was today announced as the "Best Motorcycle of 2021" by leading luxury lifestyle publication Robb Report. As part of the magazine's "Best of the Best" issue, the revolutionary new Ducati Multistrada V4 – the first in the world to incorporate advanced radar technology on a production motorcycle – was named the top two-wheeled product of the year. The award recognizes those who stand apart from their peers with exceptional craftsmanship, extraordinary attention to detail, and relentless pursuit of perfection in their field.


The Multistrada V4 S is currently available in dealerships throughout North America.

"We thank Robb Report for recognizing the Multistrada V4 S as a game-changing motorcycle with its industry-leading technology that advances rider comfort and performance much like the original Multistrada 1200S did in 2010," said Jason Chinnock, Chief Executive Officer of Ducati North America. "The Multistrada V4 S is the motorcycle that not only fits a wide variety of terrain but also many types of riders. It is rare that one motorcycle is so well balanced that it satisfies the rational rider with its versatility and reliability, yet does not compromise the visceral experience that a rider would come to expect of a Ducati."

The new fourth-generation Multistrada V4 retains and extends the winning formula of "four bikes in one" introduced by the Multistrada in 2010, now boasting the all-new 1158 cc V4 Granturismo engine, which is the same engine found in the Panigale V4 superbike. The radar technology software which is set to release into the North American market on July 1, is an advanced aid system managing both Adaptive Cruise Control (ACC) and Blind Spot Detection (BSD). The ACC is perfectly integrated into the motorcycle, which by means of controlled braking and acceleration automatically adjusts the distance (selectable on four levels) from other vehicles. The ACC system allows for more comfortable riding, especially on long highway journeys. The Blind Spot Detection (BSD) technology, housed under the headlight, can detect and report vehicles approaching in the so-called blind spot, namely the area not visible either directly by the rider or through the rear-view mirror.

Additional information about the Multistrada V4 can be found here: https://www.ducati.com/us/en/bikes/multistrada/multistrada-v4
#93

Last post by Zaph - June 15, 2021, 10:20:31 PM
3rd party trackers have been built into browsers for quite some time.  What's been happening for quite some time now is marketing analytics firms have had ways around it to still track you.  I recommend Firefox with Ublock Origin.  It has blocking the "dirty tricks" like making your browser think third party trackers are first party via DNS tricks.  Those dirty bastards will always find a way.

Your two tools on Firefox are Ublock Origin and NoScript.  Noscript is one of the most beautiful things to happen to browsers.  Almost too powerful.  With it, all websites are neutered and you selectively whitelist the scripts you want each website to run.  Imagine never, ever seeing an annoying overlay pop up in front of you again.
#94

Last post by Biketographer - June 10, 2021, 07:29:26 AM
GETTYSBURG, Pa., June 9, 2021 /PRNewswire/ -- This July, Gettysburg Bike Week will finally get to celebrate two decades of being one of the premiere motorcycle rallies in the country. This anniversary rally, cancelled last year because of Covid, goes down at the Allstar Events Complex in Gettysburg, PA, and festivities kick off Thursday, July 8, 2021, and run through Sunday, July 11.

"We are so ready to put this last year in the rearview," says GBW event coordinator Kelly Shue. "The 2020 rally was supposed to be Gettysburg Bike Week's 20th Anniversary, but we had to cancel because of Covid, so we're doing it now in 2021—and we have a slate of entertainment that's going to knock people's proverbial socks off!"

To help commemorate this auspicious occasion, the 20th Anniversary GBW rally will also feature one of the largest vendor villages and swap meets; the Cycle Source Bike Show; thrilling mini-bike racing; the fascinating presentation of Steel Horse: Motorcycles in WWII; death-defying antics of the Moto Motion Stunt Show; fun bike games; a massive Cornhole tournament; and much, much more.

And, of course, no rally would be complete without great riding, and Gettysburg has some of the best. Whether riders want to see historic battlegrounds or just hit the road for a great cruise, hundreds of miles of the best riding in the East surrounds Gettysburg. In addition to fantastic solo riding, GBW also features awesome group rides, including the Sgt. Mac Fund and New Hope Ministries Poker Runs and the Battlefield Ride of Chrome.

Tickets for Gettysburg Bike Week's extravaganza of a 20th Anniversary Rally can be purchased here. https://www.gettysburgbikeweek.com/tickets.html

New and returning riders can find updates, schedule of events, lodging information, passes and anything they ever needed to know about Gettysburg Bike Week by visiting http://www.gettysburgbikeweek.com.
#95 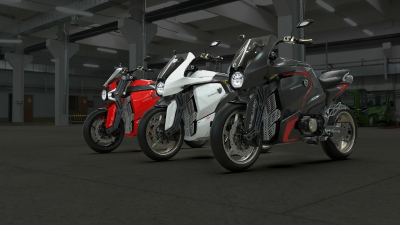 Last post by Biketographer - June 09, 2021, 07:15:26 PM
https://volcon.com/grunt/
Couple bikes soon available.
This one instantly reminded me of my 1969 Rokon two wheel drive in my garage.  But this bike actually has suspension.

NO MENTION of battery life, battery size, etc.  I know it's tough to state miles-per-charge for an off-road vehicle, but they could say how far it goes on flat, dry, land.
#97

Shooting the bull / Re: Picture of the Day