NICE photo.   Who did it?
And where?  Looks like a track-day.

Track day at Putnam Park in Indiana. I'm fairly sure Joseph Hansen shot that one. That track is pretty fun. I don't think they do bike races there, but it's a blast for track days.
42

Shooting the bull / aims to ride a 1,200-hp turbine-powered motorcycle to 400 mph

Guy Martin, British TV host and motorcycle racer, will attempt to be the fastest human on two wheels in the near future. He's going to get there with the help of a team led by another former motorcycle racer and veteran of a variety of land speed record teams, Alex Macfadzean. Their vehicle of choice: a custom-built bike with a helicopter turbine engine. 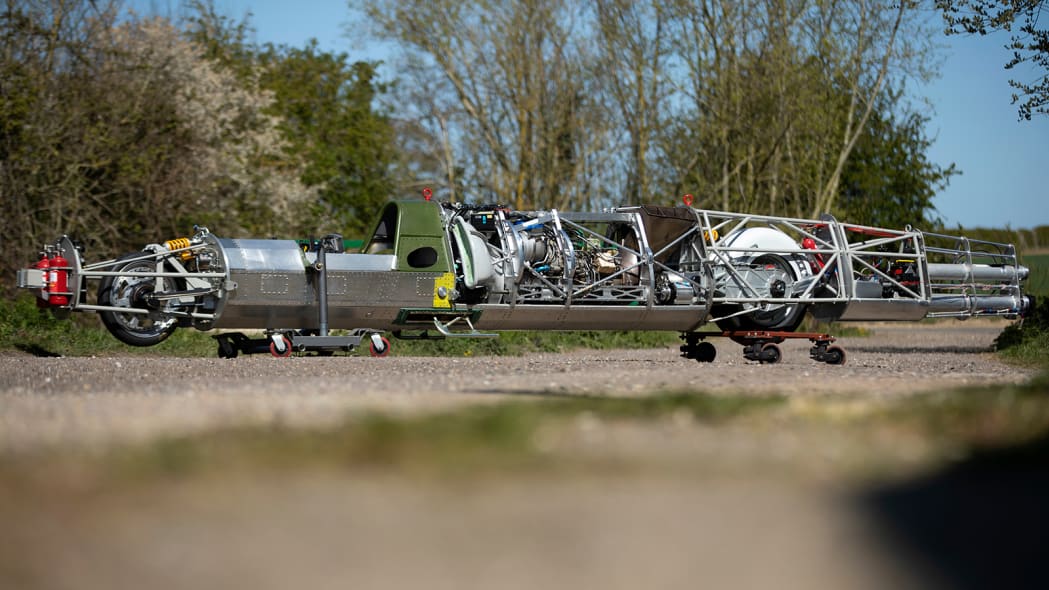 « Last post by Biketographer on April 21, 2021, 05:04:23 am »
NEW YORK, April 20, 2021 /PRNewswire/ -- With the New York Adirondack Motomarathon scheduled for June 1-4 based out of North River, NY, the first organized motorcycle sport-touring event format is back in action after the covid hiatus.

After moving its headquarters from Colorado to the East Coast last year, the iconic Motomarathon Association will retain its original format developed over more than 30 years of organized group riding that compresses as many twisty and scenic roads as possible into a four-day motorcycle vacation.

Motomarathons have been run in virtually every popular riding area in America, from the Rocky Mountains to the California Coastal Ranges and Pacific Northwest, from the Ozarks to the Great Smokies, and from the Great Lakes to New England.

Routes are designed by local experts and kept secret until the evening before each day's ride. Participants complete a series of self-recorded checkpoints, photographing their badge numbers at designated landmarks to validate their completion of the route. These checkpoints are recorded by the Motomarathon Association for event, annual and lifetime standings.

"Motomarathon is the perfect post-pandemic pastime, and the Adirondack Mountains have some of the best riding roads in the country," said new owner John Bossolt, who takes over the reins from founder John Metzger. "Long-distance motorcycle sport-touring may be one of the purest forms of individual recreation that can be shared with others, but with virtually zero contact."

Metzger, author of two books on the subject – Meditation by Motorcycle and Motorcycling Through Midlife – continues on as an advisor.

For more information, see Motomarathon on Facebook, or visit www.motomarathon.com.

« Last post by Biketographer on April 20, 2021, 07:25:52 am »
MILWAUKEE, April 19, 2021 /PRNewswire/ -- Harley-Davidson, Inc. ("Harley-Davidson") (NYSE: HOG) has received notification from the Economic Ministry of Belgium, that following a request from the European Union (E.U.), the company would be subject to the revocation of Binding Origin Information (BOI) credentials, effective April 19, 2021.

Harley-Davidson will be lodging an immediate legal challenge to this decision.

Since 2019, the company has operated with BOI regulatory credentials, allowing it to supply its E.U. markets with certain motorcycles produced at its international manufacturing facilities at tariff rates of 6%.

European OEMs, including motorcycle manufacturers, will continue operations with significantly lower import tariffs to the U.S. ranging from 1.2% for up to 800cc products to 2.4% for over 800cc products, and with automobiles at 2.5%.

Jochen Zeitz, chairman, president and CEO of Harley-Davidson: "This is an unprecedented situation and underscores the very real harm of an escalating trade war to our stakeholders on both sides of the Atlantic. The potential impact of this decision on our manufacturing, operations and overall ability to compete in Europe is significant. Imposing an import tariff on all Harley-Davidson motorcycles goes against all notions of free trade and, if implemented, these increased tariffs will pose a targeted competitive disadvantage for our products, against those of our European competitors."

Notes to Editors – BOI Context
Notification was received from The Director General of Economic Analysis and International Economy, Federal Public Service Economy (the Economic Ministry of Belgium) at the request of the European Union, that pursuant to the Implementing Decision (EU) 2021/563 of the European Commission of March 31, 2021, Harley-Davidson would be subject to the revocation of the Binding Origin Information (BOI) credentials by the Belgian Economic Minister effective April 19, 2021.

Harley-Davidson remains committed to free and fair trade and is focused on ensuring it remains globally competitive, in the interests of its stakeholders and is committed to ensuring its customers around the world have access to its products.

In 2006, Plaintiff Daniel McCullen, the owner of a Honda motorcycle, injured himself in an accident in Missouri. In 2011, he sued AHM and its authorized dealer, Shernaman, claiming the motorcycle had a design flaw. AHM vigorously defended itself in the Missouri action, ultimately securing a dismissal with prejudice. Shernaman, on the other hand, did not defend itself at all. Instead, after falling into default, it entered into a special agreement, permitted by a Missouri statute, with McCullen. The agreement provided McCullen would take judgment against Shernaman in the amount of approximately $11 million; in return, McCullen agreed to execute the judgment against Shernaman's insurers and indemnitors only. The Missouri judgment issued in 2014.

McCullen first sought to enforce the judgment against Shernaman's insurers in Missouri, but that lawsuit failed. He then sued AHM in Missouri, alleging it was Shernaman's indemnitor. After Shernaman was added as a plaintiff, the lawsuit was dismissed because the dealer agreement between Shernaman and Honda required any suit between them to be filed in California.

In a last-ditch effort, in 2020, McCullen and Shernaman filed a lawsuit against AHM in California. Shernaman claimed AHM had failed to indemnify it as required by the Honda dealer agreement, and McCullen argued he was allowed to execute his judgment against AHM as part of a "Creditor's Suit" claim.

After considering AHM's demurrer, the Court agreed with AHM's statute of limitations argument and found Shernaman had failed to bring its breach of contract within the statutory time period of four years. Therefore, all of its claims were time-barred. Further, because a Creditor's Suit borrows the limitation period from the underlying cause of action, McCullen's claim was similarly time-barred. The Court therefore sustained AHM's demurrer without leave to amend, and judgment was entered in AHM's favor.

Can anyone explain this to me ?
47